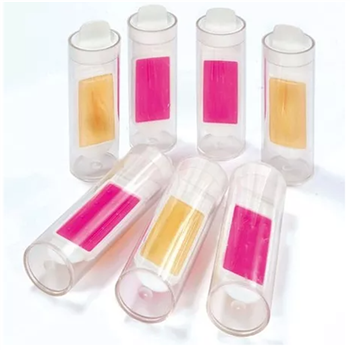 Why use dipslides over other microbial methods?

First these are sealed vials, so after the initial sample is collected the vial can remain closed and counted without even opening thus eliminating the potential for microbial contamination that other agar and broth based solutions present.

The agar later is thicker than thin film based methods and thus give far superior recovery.

Each slide is doubled sided so you are getting 2 tests per Dipslide. Also most traditional prepared plates and films* do not have neutralizers. Agars without Neutralizers can give false negatives.

Slides with Neutralizers can be used direct on surfaces (no swabs needed) to save time and labour as well as swab costs.  Since no dilution is done the sensitivity is also greater.

If you are using an outside lab, please continue doing so, but consider the advantage of doing most of your tests in house. The results will be faster and far less costly. Also the results will be more accurate since inhouse tests do not suffer from the same degree of culture growth or die off that occurs to samples in transit. **

So where did the name dipslides come from? Well aside from the slides (paddles) that can be used on surfaces like a RODAC plate, they can also be dipped directly in fluids for direct testing.

We are also happy to discuss custom lots or other special needs.